India’s rental housing market, trammelled by archaic laws and ambiguity, is adapting to the pragmatic ameliorations outlined by Finance Minister Nirmala Sitharaman in her inaugural Union Budget 2019 speech. Sitharaman’s proposed regulations in the Indian realty market have since made way for the Model Tenancy Act 2019, drafted by the Ministry of Housing and Urban Affairs, that addresses the relationship between the lessor and lessee realistically and fairly.

The new tenancy law limits the security deposit to two months’ rent and lists heavy penalties for tenants overstaying and not adhering to the contractual terms of their rental agreements. An overstay will cost a tenant twice the rent for the first two months, that quadruples in the subsequent months. However, during such a period, the landlords are not allowed to cut off essential utilities like water and electricity. The Act also talks about creating special courts to deal with disputes between tenants and landlords and puts the obligation of carrying out repairs, maintenance and upkeep of the property like painting on the owner. While the landlord can’t increase the rent during the middle of the tenancy contract, the tenant can’t sublet the premises without prior consent of the owner. The Act aims to increase accountability in alignment with the government’s equitable development plans in the housing sector. The Centre has left it to the states to implement the Act or to amend it in accordance with their existing rental laws.

The Maharashtra government has decided to enact it for new constructions and introduce an amendment that protects properties governed by the Maharashtra Rent Control Act 1999. Landlords have domineered the rental business in India, and how, for far too long, especially in Mumbai, the only Indian city to feature in a top 20 list of expensive prime residential markets in the world recorded in Knight Frank’s Wealth Report 2019. In Mumbai, a real estate agent’s opening and closing has always been about what the owner wants, demands rather, barely skimming the surface of what a tenant wants, barring the monthly rent and astronomical security deposits. The broker is almost always submissive to an owner’s preferences, despite the tenant being as much a paying customer as the landlord. This parti pris dynamic needs to change along with the Act towards a balanced equation between tenants and landlords. Tenants need to rent and owners need their money – it’s a simple business deal and it’s about time it’s conducted like one.

The realty business in India is inescapably going to change with the Act, giving impetus to luxury rentals at the expense of buys. The biggest incentive in the rental sector is the security deposit being restricted to two months’ rent, allowing a tenant to utilise and invest the money for herself/himself, rather than blocking it with a landlord that earns interest off it. The Mumbai rental market stands to gain the most from the new Act.

Luxury rentals are far more fiscally appealing and viable with the new Act coming into play than ever before. The Act increases the confidence and security for both, landlords and tenants, getting into rental agreements aligned with the new norms, leaving minimum room for legal discord. Landlords will have to desist from imposing delusional demands on a tenant like sky-high security deposits and maintenance of the property and tenants will be legally bound to pay the weighty fines for overstay and misuse of a rented property.

This feature first appeared in Gulf News on August 3, 2019

RUBINA’S RADAR — UNEDITED — STYLE — THE MALAIKA ARORA INTERVIEW — ON INSTA LIVE ON MONDAY, 20th SEPTEMBER 2021 AT 6PM IST
WHAT’S IN MY GLASS?
HAPPY BIRTHDAY TO A CELEBRATED INDIAN AND WORLD-CLASS VIRTUOSO OF THE PERFORMING ARTS @azmishabana18 EVERYONE HAS A FAVOURITE SHABANA AZMI FILM... WHAT’S YOURS?
JUSTIN BIEBER, THAT’S ALL. 🔥🔥🔥 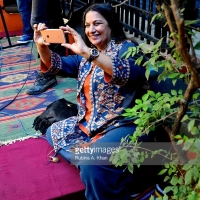